Home › Blog › Are You Being Overrun By Spiders In Louisville?

Are You Being Overrun By Spiders In Louisville? 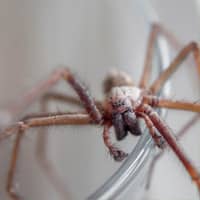 This is the time of year when folks in Kentucky start noticing house spiders. It isn't your imagination. They do become more of a pain in the fall. Why is this? Some say it is because spiders are looking to get in out of the cold. This is only partly true. Let's take a look at this house spider problem and see if we can learn some things that will protect us from the fall invasion.

The term house spider does not refer to one species of spider, but many. House spider is a classification, much in the same way the term rodent signifies warm-blooded mammals with front incisors that never stop growing. The house spider--as the name suggests--refers to spiders that prefers to live in human dwellings. What makes things a little muddy, is that many species of spiders have names with the word "house" in them, like Parasteatoda tepidariorum (the common house spider), Tegenaria gigantea (giant house spider), and others. But, these are not the only spiders you'll find in your Louisville home. You may stumble upon a daddy long-legs, cellar spider, orb weaver or something more sinister, like a hobo spider, yellow sac spider, black widow and others. But, the most common spider you will see is the common house spider, as you might assume from the name. That is the spider we're going to focus on in this article.

The common house spider, also referred to as the American house spider, is about the size of a nickel, and brown in color. This spider is often mistaken for a brown recluse because of its color, but its large round abdomen will help you easily recognize it. The brown recluse has a thin abdomen, pale coloring and a violin symbol on its back, near the head. It is important to differentiate between these two spiders because the venom of the brown recluse is much more potent and able to cause necrosis in the bite wound. The venom from a common house spider will leave you with an itchy welt at most.

The American house spider, like all spiders, has a built-in antifreeze that allows it to survive outside in the winter temperatures of Kentucky. Though it is a cold-blooded creature and unable to regulate its own temperature, it is born with an ability to resist being killed by the formation of ice crystals in its body, like other cold-blooded insects. So, why are you seeing more spiders in fall? The answer is actually complex. Let's break it down into three reasons:

If you have spiders in Louisville, Owensboro, Evansville or anywhere in our extensive coverage area, give us a call. At Action Pest Control, we know spiders. More importantly, we know how to keep spiders out of your Kentucky home.