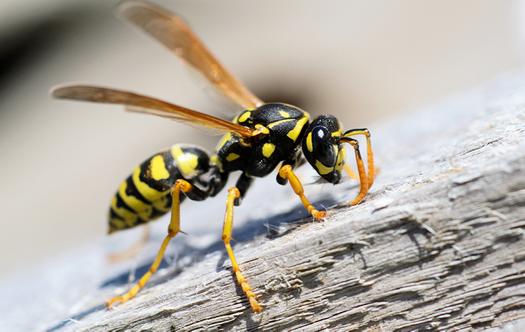 July is one of the best months for outdoor activities. This is the time to hike, camp, climb, swim, and play games outdoors. Summer is a great time of year, but the outdoors also has its drawbacks. One thing that can quickly ruin outdoor fun is getting stung by a wasp. Wasp stings can be incredibly painful, and they can cause severe allergic reactions in some people. Even when the pain subsides, wasp bites are often itchy as they heal.

If you have a wasp nest near your home, you and your family could be at risk of getting stung repeatedly. Unlike bees, wasps can and will sting multiple times. Don’t ignore stinging insects - keep an eye out for their nests! Here are some things to keep in mind as you watch for wasps and other stinging insects this summer.

There are several different species of stinging insects in Kentucky. Some (like honey bees, bumblebees, and carpenter bees) are not aggressive, and will only sting if they feel threatened or under attack. Other insects, like yellow jackets, wasps, and hornets, can be aggressive and can sting multiple times. Wasps and yellow jackets often build their nests on the sides of homes or playgrounds, putting your family at risk. Most stinging insects are pollinators, which means they are good for the environment, but they’re also bad for your house. Their stings are painful, and their nests can cause damage to your home.

Here’s what you can do about it:

The best way to avoid wasp stings is to be aware. Watch for wasp nests, especially on eaves, chimneys, or porches. The moment you see a wasp nest you’ll want to take action. By the end of summer, wasps and other stinging insects are quite active, and nests will be fuller than at any other point in the year. The sooner you take action, the less opportunity you give wasps to multiply and spread.

You can also decrease your odds of a wasp infestation by removing any foliage and plants near your house. Locate plants further from your home and outdoor play areas so insects don’t have as many hiding places or easy access to food and water.

Dealing with a Wasp Problem

Once wasps have already built a nest on the side of your house, or anywhere near your house or yard, there isn’t much you can do on your own. Any attempts to get rid of a wasp nest without the proper experience, knowledge, and tools can lead to several painful stings. If members of a nest feel attacked they will defend it, and the number of bites can be dangerous. By attempting to get rid of a nest, whether by burning it or trying to move it, you are putting yourself and your family in danger, since angry wasps will become even more aggressive.

Instead of risking this danger you should call Action Pest Control. We have the tools to safely eliminate wasps and other stinging insects. We can identify the exact species of stinging insect, since it can be hard to know the difference between wasps, hornets, and yellow jackets. At Action Pest Control, we take a holistic approach to pest control that will not only eliminate stinging insects but also help you to eliminate attractants that may be bringing these insects onto your property. Don’t hesitate to call for safe and effective inspection and treatment.