Home › Blog › Tips For Keeping Geese Away From Your Commercial Facility

Tips For Keeping Geese Away From Your Commercial Facility 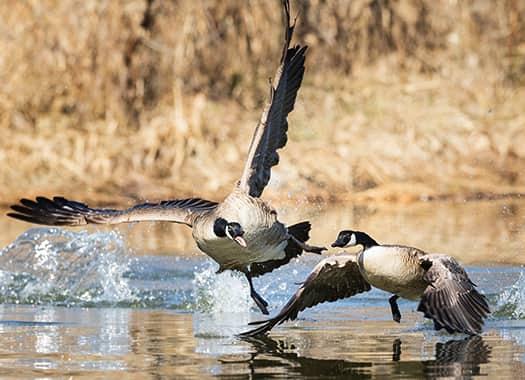 While we like animals, we don’t necessarily like them being a nuisance. If they’re hanging around your business, then chances are that is what is happening. You may be asking yourself, why aren’t these geese moving on? There’s a simple answer for that. Not all geese migrate, which means they may be hanging around for a while and becoming a nuisance. If your business has customers, employees, or pedestrians walking close by, you don’t want to have aggressive birds bothering them or running them off!

People like to see birds, maybe even take pictures when the goslings are following the adult geese around. While this can be cute to watch, if someone gets too close, geese are territorial and may go after the person, especially when they are nesting or have goslings nearby. They have been known to charge people who get too close.

But who doesn’t like to feed wildlife? Even though people mean well, there are concerns people don’t always consider. When onlookers feed geese, the food is most likely landing in the same place where the geese defecate. This is not healthy, especially since large concentrations of waterfowl can facilitate the spread of disease. Another concern is that aggressive geese may also chase a person down with the intent to steal the food.

Geese can carry lice and mites, which is not something people want to risk getting from them. Another concern is water, such as a lake or pond on the property, which is most likely the reason the geese chose this area to nest. Since geese can carry salmonella, the water they swim in or defecate in can be more dangerous to pets that may stop to drink the water. The animals who drink the water are prone to giardia or cryptosporidium, both of which can cause serious illness.

How can I deter geese from coming around?

Remove their water source - but this isn’t always an option. But you don’t want your property to be hospitable to geese.

Geese can become domesticated quickly if they are getting food from you or your patrons. Stop feeding the geese because they will stay around. Feeding geese human food can damage their digestive systems, too, so it isn’t necessarily a good thing to feed them food that is meant for human consumption.

Not all DIY methods are practical, such as getting a trained goose-herding dog in order to convince the geese they are not safe from predators. The Humane Society doesn’t recommend scaring geese who are nesting, molting, or raising young. Plus, this method is recommended to be done by a specially trained dog that is working with its handler. That method sounds like a lot of work and becomes just as much of a problem as the one you’re already dealing with!

Another DIY method that isn’t a great choice for commercial facilities is to let the grasses around lakes or ponds grow to 18 inches or more, and several feet wide. This makes the area look shabby and unkempt, and is not appealing for visitors in a business setting.

Instead of becoming frustrated because your company is going to the birds, call Action Pest Control. Regardless of the species, we have the experience and resources to take care of your bird problem in an effective and humane way so you and your company can get back to business.