Pigeons, Starlings, Sparrows And Your Business 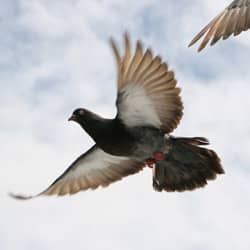 There are 914 species of wild bird found in North America, and all but three are protected by law, in most states. So, when we talk about bird control, we're not talking about the yellow breasted cockatoo or the black-capped chickadee. We're referring to pigeons, starlings, and sparrows. These birds are vectors for diseases, like salmonella, histoplasmosis, ornithosis, and pseudotuberculosis. They carry parasites, like fleas and mites, in their feathers. And, they contaminate public areas, deface monuments, and damage buildings.

Of the three, pigeons are the bird most pest controllers are called in to remove or control. Usually, it is the unsightly mess caused by their droppings that prompts businesses to take action. This creature is so filthy, many refer to them as "flying rats", and for good reason, the foraging habits of pigeons bring them into contact with rotting food and bacteria. This makes their feathers and their droppings a health risk.

These little birds--that are not native to America--have aggressive nesting habits that researchers believe are contributing to the decline of native bird species. They also present a danger to homes and businesses. Their elaborate nests cause water damage, by clogging gutters and downspouts. Their nesting habits can also start fires in electrical boxes. Their droppings contain uric acid, which can cause structural damage, and contains bacteria, fungal agents, and parasites.

European starlings are a pest bird, introduced to the United States in the 1890s. Like the sparrow, the starlings are believed to be a contributor to the decline of native bird species, because they often "bully" other birds out, when they come to nest. These birds can transmit disease to both livestock and humans, and are connected to the spread of gastroenteritis (swine flu), blastomycosis, salmonella, and other pathogens.

A modern pest control company, like Action Pest Control, uses safe, eco-friendly methods to deter birds from perching or roosting, like structural modifications, exclusion installations, and flock dispersion methods. And, they remove nests and roosts, and decontaminate roost areas. If birds are nesting on your business, don't take matters into your own hands. Rely upon experts who know how to keep these pest birds from returning. Your reputation is important. Don't let it go to the birds.