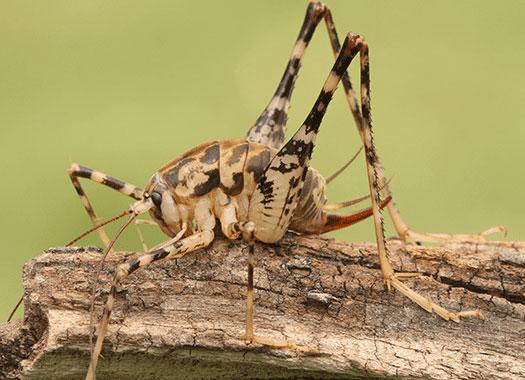 It's one of those hard truths in life; that insects outnumber us. As a matter of fact it's shocking just how many species of insects there are out there, let alone individual creatures, a truth that often leaves people throwing up their hands at the prospect of identifying those they encounter. This can be especially frustrating when dealing with pests, and trying to understand what risks their presence poses. One of the pests that people in the Louisville area can have trouble knowing how to react to is the camel cricket, commonly called the "cave" cricket.

Growing no larger than 1.5", the camel cricket is a rather creepy creature at first sight, with its long antennae and even longer hind legs. They are called camel crickets due to their somewhat humpbacked appearance and are sometimes mistaken for spiders due to the formation of their legs. It can be very concerning when a camel cricket jumps toward you, but camel crickets do not bite and are only desiring to flee when they make sudden movements. Outdoors you will generally find them in dark, damp places, such as under rocks or in mulch beds. Inside they prefer similar conditions, gravitating toward the basement or any out of the way corner they can find.

Camel crickets can cause only a minimal amount of harm, but they will chew on plant life or fabrics, and cold weather may cause them to congregate, which risks more focused damage. Lack of clutter and removing humidity will greatly discourage camel crickets from remaining in buildings, as both factors are key to their survival. Keeping them out in the first place involves making entry both too difficult and too dangerous to be attempted. Crickets are a prime food source for rodents and birds, so leaving an open space between structures and such things as flower beds will discourage crickets. Ensuring that foundations, doors, and windows are well sealed is also a crucial step against any pest, and should be employed here as well.

Even if you know what type of pest you're dealing with, and have some idea of how to go about addressing the situation, protecting your Louisville home or business from infestation can still be a daunting task. There are many factors to consider both inside and out, and the presence of one type of pest often means that conditions are ripe for another, which means expanding your assessments and prevention methods. For instance, camel crickets are a great food source for other pests, having them inside or out in any significant numbers should make you wary of a possible rodent presence in the area as well. Regardless, even for a pest like the camel cricket that does only minor damage, the desired result is the complete elimination of the problem. For that, Action Pest Control is standing by to step in and step up to any challenge that pests may present. We know where to look for points of entry that camel crickets and other pests use, and how to seal them up tight. Our pest prevention and elimination methods are tried and true, and our pest control programs allow you to hand over the task of defending your assets from pests to us year-round. Rather than focus on the pest you may or may not be dealing with, bring in the solution that will allow you to focus on other things entirely because your pest problems are no more. Action Pest Control has residential programs that will make your pest problems disappear.