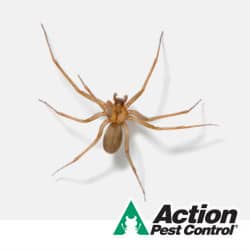 The Tri-State area of Indiana, Kentucky and Illinois is home to many types of spiders, some of which relatively harmless and are more of a nuisance than anything else. There are however a couple of dangerous spiders in Indianapolis, Terre Haute and Louisville as well as throughout the region that residents should be on the lookout for. Both the brown recluse spider and the black widow can be found in these parts and are considered dangerous because of the fact that their bites can cause a strong reaction and have even proven fatal in some cases.

Have you ever come across a spider with a fiddle shaped pattern near its eyes? If so, then you’ve had a close encounter with a brown recluse. Usually tan to dark brown in color, both the male and female of this species measures about ½ inch in length.

Though the brown recluse spider is not considered aggressive towards people (they’ve even been noted as shy), this arachnid could bite if it feels threatened or is handled. A brown recluse spider bite may produce nothing more than a mild irritation but it could also prove more serious and result in open sores. Again, in some instances victims have died from a bite. Brown recluse spiders tend to seek out secluded areas (i.e. attics, crawl spaces, basements, and closets etc.) and are most active at night when they are looking for prey.

The venomous black widow spider appears glossy black in coloring and is most recognizable by the reddish orange hourglass marking on their belly. Larger than the brown recluse spider, females can reach up to 1 ½ inches in length when their legs are fully extended.

While black widow spiders are more likely to spin webs outside, in areas that are dark and close to other insects, they may venture into garages, sheds and basements to name a few places in order to find prey. Black widow spider bites generally occur if they feel threatened and can be problematic for some.

Our exterminators understand your reluctance to encounter these dangerous spiders and have put together a few prevention tips.

If you’ve discovered spiders in or around your home, contact Action Pest Control today. We offer pest control for spiders and other unwanted pests.  We also specialize in brown recluse spider control in Indianapolis and throughout our service area. Call (888) 351-8223 to find out how you can keep brown recluse and other spiders out of your home!

Action Pest Control received an average rating of 4.6 out of 5 stars from 100 reviews. 4.6