Home › Blog › What To Do About Stink Bugs In Spring

What To Do About Stink Bugs In Spring 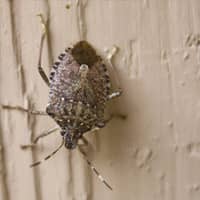 Stink bugs are seriously disgusting. If you're reading this because they are in your house, I'm sure you're nodding your head in agreement right now. It only takes a few stink bugs to ruin a good night's sleep, taint food that was left on a table or counter, and make your home uncomfortable to live in. Just ask Joan Huling, who recently invited WSBT 22 inside her Mishawaka home. She has never had a problem with bugs but now stink bugs are everywhere.

On Tuesday, March 17, WSBT reporter Kelli Stopczynski stopped by to learn more about Joan's problem. The sweet old lady showed Kelli around and explained how stink bugs have completely overrun her Indiana home. They crawl on the counters, in the curtains and all through her closets. Trying to describe the horror of living with these bugs, she said, "And I went to make me a toast and I put my butter on it and I went to bite the toast and I got that taste in my mouth …" Then, she covered her mouth, no doubt remembering that nasty taste. Joan explained how she has lived in that home for 9 years. Kelli asked, "Have you ever had a problem this bad?" "No," said Joan, emphatically, "Never had bugs in my life."

To help Joan out, WSBT called expert Paul Medich of Medich Pest Control to give some insight into the problem. Joan was quick to ask, "How do you get rid of 'em?" His response? "Uh … You can't right now." He continued to explain that stink bugs get into homes in fall and hibernate in the walls, adding, "If you opened up your walls in January, February they'd look like stink bug wallpaper." It is true, the bugs overwinter in the wall voids of homes and businesses by the hundreds and even thousands. If you're seeing them walking around in your common areas, you're only seeing a miniscule fraction of the bugs that are actually in your home.

For Joan, these harmless little bugs get her heart racing. She screams in distress as she pulls curtains aside to find and dispose of them with wads of toilet paper. "Oh, the smell is unreal. I'm gonna go nuts," she exclaims. Exterminator Paul Medich recommends having a professional spray the exterior walls of your home in August to keep these pests from overwintering, and warns against trying to use foggers in your attic to kill stink bugs. If you have dead stink bugs in your walls, you'll attract other, more damaging pests, that will eat those carcasses.

If you're dealing with stink bugs in your home, Action Pest Control, one of the largest pest control providers in the Midwest, suggests getting a year-round pest control plan. Preventing pest invasion is more cost effective than extermination. And, when you partner with a company like Action, you don't just get treatments. Their licensed pest control specialists will show you ways to keep pests from wanting to come into the common areas of your house, even when they're already in your walls.

In the case of stink bugs, they suggest keeping counters free of jelly smears, toast crumbs and other food sources. Leave dishes in soapy water instead of sitting on the counter with food on them. Keep fruit in the fridge. Fruit is a prime food source for stink bugs. If you have no food for them to eat, they will be less likely to crawl around the inside of your home.