One of the most intimidating pests in Louisville, KY is the wasp. Whatever type of wasp you have on your property, you probably don't want it there. But why are wasps there in the first place? Learn more about what attracts wasps before you find out how to keep them away. 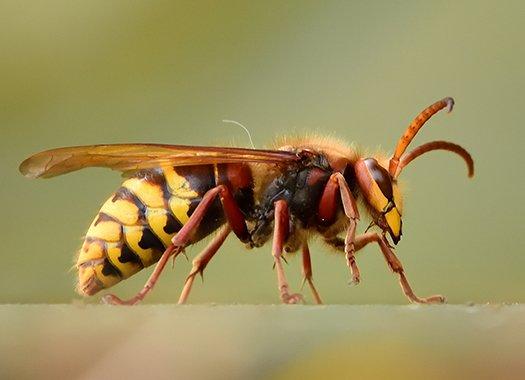 Which Wasps Live In Louisville?

Across the globe, there are thousands of species of wasps. However, there are only a few wasps that plague Louisville, KY residents.

Typically, Yellow Jackets are known for harassing locals. They are social creatures with yellow and black striped markings. Known for their painful sting, yellow jackets are most likely to attack when they feel threatened.

Another common wasp in Louisville is the Hornet. As the largest type of wasp, hornets are intimidating insects. They live in groups and can be highly aggressive, depending on the species. One of the hornets you're likely to see is the bald-faced hornet.

Paper Wasps are also prevalent in the area. Unlike yellow jackets, paper wasp nests aren't fully enclosed. You can also identify this wasp by its unique colors. Paper wasps tend to be red, black, and yellow.

If you're taking the time to read this, you probably want to know more about wasp prevention. This is the best and only way to ensure wasps leave you and your family alone. When a wasp senses a threat, it goes into attack mode. Wasps sting intruders, and they don't go easy on the threats. Usually, wasps sting multiple times and in large numbers. Every time a wasp stings you, there's a chance you will develop an allergy.

An allergic reaction to a wasp sting is no laughing matter. The most severe reaction involves anaphylactic shock and shouldn't be taken lightly. To protect everyone on your property, you need to prevent wasps from taking over.

For your wasp prevention methods to be effective, you need to know what attracts wasps. All of the following factors make a property particularly attractive to these Louisville pests:

What To Do About Wasps

If you find a wasp nest in your property, call us at Action Pest Control. Thousands of customers trust us to handle their pest control issues. When you call us, you can trust an experienced technician will come out to your property and safely remove any wasp nests. We offer advanced stinging insect pest treatments and a no-obligation inspection. Call us today at Action Pest Control to learn more.