During the summer months, all sorts of pests become more active, and spiders are no exception! The two venomous spiders that threaten to invade Louisville homes are the black widow and brown recluse. While some are more frightening than others, it’s important to understand that both venomous and non-venomous spiders can present problems inside our homes if they decide to invade. In addition, a heavy spider presence in a home can have many harmful implications, including that there may be an increased presence of other harmful bugs invading your home that are attracting the spiders inside. Let’s take a closer look at some of these spiders and why we need to take measures to prevent them from invading. 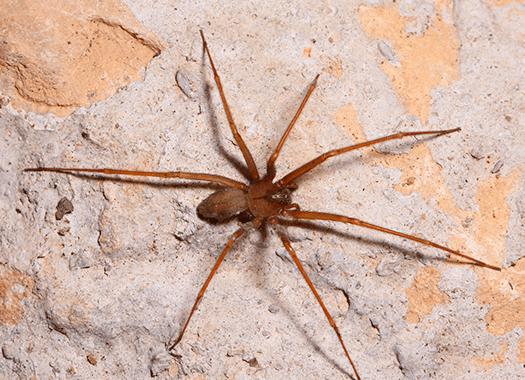 Unfortunately, there are several species of venomous spiders found in the Louisville area including the brown recluse spider and the black widow spider.

The black widow spider has a very distinct shape; these spiders have large, round bodies and long legs. The females have a distinguishing red hourglass marking on their abdomens which makes them easily identifiable. Though the males don’t have this distinctive characteristic, they often have other red markings on them.

Many people are afraid of black widow spiders as they think there will be immediate, deadly consequences from being bitten, but that is not the case. Black widow bites can be painful and cause symptoms that can be quite frightening such as an irregular heartbeat, muscle cramps, and abdominal pain, but these symptoms will subside with treatment. However, it is important to seek medical attention if bitten by a black widow spider because, as with many bites and stings, some people may have a more severe reaction than others.

Other Pests And How To Get Rid Of Them

If you have one type of pest in your home, you most likely have other species of pests infesting your home as well. If one can get in, then it makes sense that there is an entry point of pests somewhere in your home allowing even more pests to gain access to your home. Many bugs, insects, spiders, and other pests rely on each other. Ticks can ride into your home on invading rodents, spiders will eat flies, and so on. The best way to get rid of venomous spiders in your home is to utilize a professional year-round pest control plan to keeps all the pests, including spiders, out!

If you are tired of worrying about whether every spider you see in your home is venomous or not and don’t want to take your chances attracting other pests to your home, then call Action Pest Control for relief! Our pest control technicians will help you select the plan that will solve your pest problems and put your mind at ease!