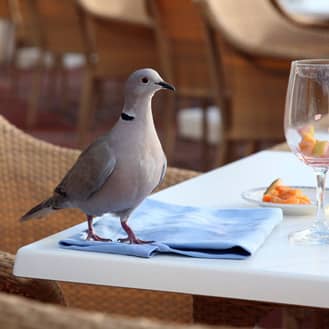 Pigeons are not only among the most intelligent of birds, a study conducted by the University of Montana declares the pigeon to be one of the smartest, most physically adept creatures in the entire animal kingdom. The accomplishments of pigeons are staggering. They have been taught how to recognize all 26 letters of the English language. The superior eyesight of the pigeon includes seeing ultra-violet and has enabled them to be able to be used to save thousands of people lost at sea. This keen eyesight also allowed them to be used on many rescue missions during WWI and WWII. Additionally, the navigation abilities of the pigeon is unique in being able to learn routes back to their home from long distances.

A study from Keio University in Tokyo discovered that pigeons have a higher self-cognitive ability than the average child. In another instance pigeons discovered that walking in a certain location would trigger automatic doors to open allowing the pigeon to step inside and eat crumbs from the floor.

What does all this intelligence really mean to businesses? Are they becoming harder to deter due to their intelligence and innate reasoning abilities? It is indisputable that bird droppings can harm building materials of all types including wood, steel and stone. As these droppings accumulate, gutters become clogged, roofs are damaged and painted surfaces are discolored. Electrical equipment has also shorted out due to accumulative droppings from birds.

Perhaps an even greater concern than damaged building materials is the ability to transmit diseases and parasites. Airborne dust from dried out bird droppings causes inhalation diseases. Another risk to commercial establishments is the food and drinks that becomes contaminated by coming into contact with bacteria from birds and causing ingestion diseases. These safety and health issues, along with the potential structural damage, should motivate business owners to establish prevention measures and deterrents that will remove the ability for these large populations of birds to inhabit buildings.

Removing the ability to roost will go a long way in driving away pigeons and other bird pests. Bird control strips, or bird spikes, have been highly successful deterrents. They come in all sizes and even have a choice of colors to help them blend in with architectural design of the building. These strips are placed along all peaks and ledges where birds might roost.

Another deterrent is bird netting. This is a good choice for open warehouses or other buildings that allow birds to get up into the rafters. This economical bird netting will not allow them access to nesting and roosting in the rafters. There are many options when it comes to bird control, it is advisable to contact Action Pest Control to eradicate, cleanup and manage bird infestation.