The people of Louisville didn't build this city into what it is today by being afraid of anything. However, as tough as we act, if we're honest with ourselves, we would all admit to being pretty terrified of cockroaches. It's not like they're all that big, and we aren't really afraid of their bite, so what is it that makes our skin crawl when we see them? 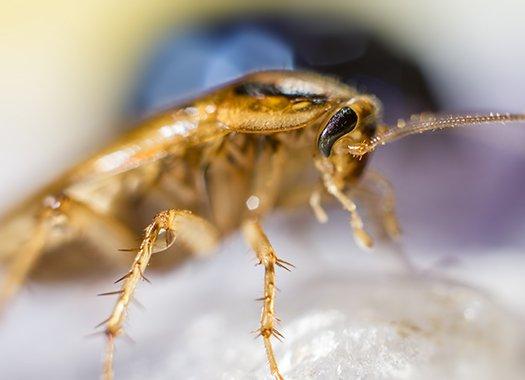 If someone were to ask us why we feel this way about roaches, we wouldn't really have a good answer. But, of course, we're irrationally fearful anyways. What many people don't understand is that the danger is actually real. While cockroaches may not attack humans, they can still harm us in a variety of ways, so perhaps our bodies are just instinctively warning us of the dangerous reality of roaches.

The Roaches Of Louisville

In order to understand how dangerous roaches are, let's take a look at the common roaches plaguing Louisville homes.

The German cockroach is one of the most common species of roaches in the area. While small compared to most roaches, these light brown to tan-colored pests can infest your home in large numbers and cause a lot of damage. Plus, their size allows them to get to places other roaches can't, so they can live and feed in areas with limited access, also making them very hard to get rid of. These little guys usually prefer areas with high moisture like kitchens and bathrooms, like most pests.

Next up, the American cockroach is considerably larger than its German counterpart. In fact, it's one of the largest roach species in the world, and it's dark reddish-brown body creates quite the imposing figure. They typically have a yellow spot on the back of their necks, differentiating them from other brown roach species. These pests love the warmer, damp areas of the home like heated basements, garages, and under appliances in the kitchen.

The Oriental cockroach is also a common pest, measuring just under the same length as its American counterpart. These roaches are usually a dark reddish-brown like the American cockroach, so their shiny outer coating is the best way to differentiate them. These pests also carry the most bacteria of all roaches since they spend a lot of their time in local sewers and drains.

Preventing Roaches In Your Louisville Home

Roaches are not only an unpleasant intruder, but they're also very dangerous to your health. Since they carry bacteria and diseases with them everywhere they go, they can easily contaminate your furniture and meal preparation surfaces. Imagine a roach searching for food in your kitchen, leaving bacteria all over everything it touches. Plus, they'll also secrete a pathogen that can bother those with allergies. That's one way to spot a severe infestation: this pathogen will leave a musty odor and even smudge the walls on which lots of roaches in Louisville are active.

Other signs of an infestation include roach droppings or seeing a roach during the day (as they are usually only active at night). If you see dark droppings in the corners of rooms or at the end of light fixtures, you might have a roach infestation.

Even if you do this right, though, it can be tough to avoid an infestation. Even store-bought sprays can have inconsistent results. The best way to eliminate roach activity in your home is to contact the pest professionals here at Action Pest Control.