German Cockroaches Are A Challenging Foe 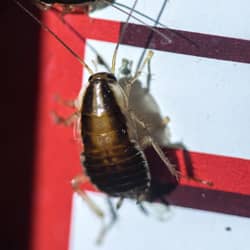 German cockroaches do not get their name because they speak German or come from Germany.  Their scientific name happens to be Blatella Gemainica (Linnaeus)!  These horrible little pests can actually be traced back thousands of years in the fossil record!  They are the most prolific of the entire insect world and have invaded homes and businesses across the globe.  In fact, this particular species of cockroach is the number one invader of homes, apartment buildings, restaurants, hotels, and businesses in the U.S.  Cockroaches have been able to adapt to just about any temperature or climate and are extremely successful survivors.

German cockroaches are relatively small, measuring only about ½ to 5/8 of an inch.  They are brown to tan colored with two dark parallel lines that go from its head to its wings.  The adults are winged insects, but they do not fly.  The immature German cockroaches do not have wings.  German cockroaches have wide, narrow bodies that are perfect for squeezing into small cracks and crevices.  They sleep the day away in damp, dark areas, and spend the night searching for food, water, and a mate to snuggle up with. In fact, these cockroaches are avid breeders - which is another reason why they survive so well.  Not only do they produce a large amount of eggs when they breed, but they also have the shortest time getting from egg to maturity.

They love moisture and are most commonly found in bathrooms and kitchen areas.  They love food in general, but their favorites include: starches, meat products, grease, and anything sweet!  These disgusting little creatures frequent dirty, germ ridden places such as trash cans, dumpsters, and sewer areas.  They carry many bacteria, viruses, and fungus on their dirty little bodies that they can then transmit to your counters, cupboards, and food items as they scurry through at night searching for food.  And, if that isn’t bad enough, according to the University of Florida entomology website, "in extremely heavy infestations (they) have been reported to bite humans and feed on food residues on the faces of sleeping humans.”  Ughhh!

German Cockroaches do spread disease and are specifically known to transmit germs that cause food poisoning, diarrhea, dysentery, and more.  They can also cause allergic reactions in some people including: wheezing, coughing, stuffy nose, runny nose, and asthma attacks.

These tiny creatures are professionals at hide n’ seek, breed quickly, and have a high survival rate making them difficult to eradicate on your own.  If you are battling with German cockroaches in your Louisville home or business, or if you want to be proactive and keep them from arriving in the first place, then a call to a professional like Action Pest is what you need.  Our highly trained pest control technicians are armed with the technology and experience to discreetly, safely, and effectively eliminate your cockroach issues.  Don’t let these little pests become comfortable in your home or business; evict them today with a call to Action Pest.