Are Mosquitoes In Lexington, KY Dangerous? 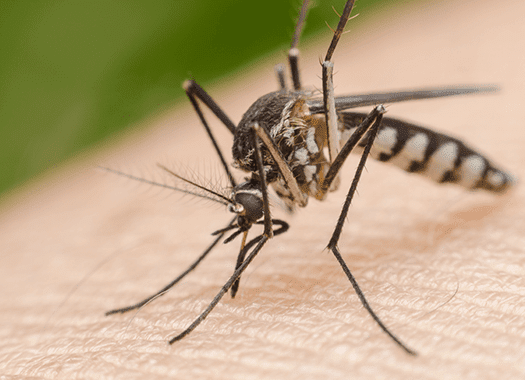 Yes! And no since the mosquito itself is not dangerous. It can sting a little when it injects it's stinger into your skin for a blood meal and itch like crazy afterward, but it does not have sharp teeth to bite with, claws that scratch or inject any venom. The danger lies in the substances they could be carrying within them. When they suck your blood for a feast they can transfer diseases through their blood and saliva. Let's take a closer look at mosquito-borne disease and how it could affect Kentuckians.

Malaria is a mosquito-borne parasitic infection that is a serious problem for people who live in high risk places like Africa, South and Southeast Asia, Central and South America, the Caribbean and the Middle East. If someone from the United States visits one of those areas, they can potentially bring it back to the United States. This is how it works; If a mosquito were to feast on the blood of a person that returned to the United States that had contracted malaria, then went on to feast on someone else, that person could also get malaria through the mosquito. With that said, even though many people are reported to have malaria, less than 12 people each year die in the United States from it.

The Zika virus is the latest mosquito-borne illness that causes problems for pregnant women particularly and their unborn children. It can cause birth defects like microcephaly. Zika seems to be increasing rapidly in Central and South America, and has reached U.S. shores. Cases of the Zika virus have been documented in Kentucky however they were travel-related and/or transmitted via sexual exposure. Other parts of the country have not been as lucky. In South Florida and Brownsville, Texas, local mosquito-borne Zika has been reported by the CDC.

Some additional diseases are dengue fever and the chikungunya virus. Dengue fever occurs mostly in Puerto Rico and the U.S. Virgin Islands, whereas the chikungunya virus had it’s largest outbreak on the island of Réunion France. Both of which have had reported cases in the United States. Less serious mosquito- borne illnesses will just cause flu like symptoms that can be painful, causing body aches, diarrhea, fever and vomiting.

So are mosquitoes in Lexington dangerous? They certainly have the ability to be. Reducing mosquito populations is encouraged, so that these illnesses, diseases and viruses can be avoided. The best way to stop the reproduction of mosquitoes is to call on a professional pest control company that can help reduce the population by killing mosquito eggs. You can also help by removing any standing water on your property as well as items that collect water like clogged gutters, old toys, tools that are left outside. If you are travelling, avoid places that are high risk for mosquito-borne illnesses. When going outdoors, dress covering most of your body in light clothing and wear bug repellent.  Click here for more mosquito prevention tips.

When looking for a pest control company for your mosquito problems in Lexington, Kentucky, you can count on Action Pest Control. “Before infected mosquitoes come to bite, take action, and get Action.” We have a comprehensive mosquito reduction program that gets rid of breeding grounds and reduces the number of mosquitoes in your backyard. Don’t let the fear of illnesses or mosquitoes stress you out, you can get peace of mind by calling on Action Pest Control, we have state certified pest management professionals and board certified entomologists on staff looking out for you.