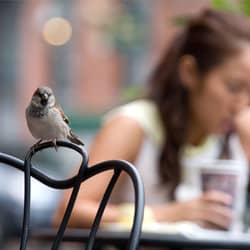 It is more important than ever to protect your business from pest birds. A new study published in the journal PLOS ONE, makes an even deeper connection between birds and the spread of the bacterium, Borrelia burgdorferi, which is responsible for Lyme disease. This is what you need to know.

What is Lyme disease?

Lyme disease is an infection humans contract from a tick bite. This infection can affect internal organs, joints, muscles, heart, nervous system, and the brain. If not caught and treated early, Lyme disease can hide in the body causing problems for weeks, months and even years. This can lead to problems with the heart, nervous system, digestive process, reproductive system, muscles, joints and skin.

How do birds spread Lyme disease?

It has been understood for some time that birds can harbor Borrelia burgdorferi in their blood, but their connection to the spread of Lyme disease was poorly understood. The study cited in the magazine PLOS ONE, done by a team from UC Berkeley, sheds light on which birds are the most important carriers, as well as their behaviors and their habitats. This study shows conclusively that the birds most likely to carry this bacteria are most common to suburban environments.

Birds themselves do not give this disease to humans, because they do not sting or bite us. But young ticks that use them as hosts contract this bacteria when they get a blood meal. The bacteria is then transported to humans when a tick moves to a human host.

This relationship between ticks and birds can pose a threat in urban areas, and far beyond. "Birds are much more capable of carrying diseases long distances than the small-mammal hosts typical of Lyme disease," states Morgan Tingley, an ornithologist who was not part of the UC Berkeley-led study, "birds may end up playing a larger role in disease ecology than other animals because of their ability to quickly and easily move long distances and to new habitats. In the same way that airplanes can help spread disease across nations, birds do the same thing for our ecosystems."

How do I protect my property from birds?

The next time you see an American robin, dark-eyed junco, or golden-crowned sparrow dancing around in the bushes and trees on your property, be aware that they are prime carriers of this bacterium, and a carrier of the ticks that can spread it to you. Contact a pest bird expert like Action Pest Control, to learn how to exclude birds from your home or business.