Many people assume that pests are mostly a problem during the summer, but the truth is that pests can be an issue year-round. While certain pests are most prevalent during warmer months, other pests tend to come inside during the cooler months, searching for protection from the weather and a place to hibernate over the winter. 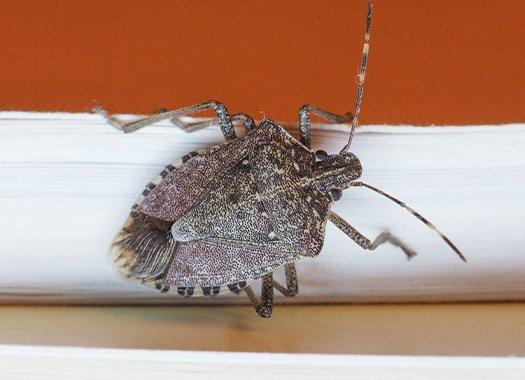 One pest that many people find disgusting is the stink bug. These insects are known for the odor they emit when they are threatened or crushed. While there are thousands of stink bugs species, the most common in the Indianapolis area is the brown marmorated stink bug. You might find them year-round, but you’ll most commonly encounter them indoors as the weather starts to cool down.

These bugs have bodies shaped like a shield, and they are a mottled grey and brown color. They also have six legs and a pair of antennae and are less than an inch long.

While these bugs are in Indianapolis, they are an invasive species in the United States. They aren’t native to the country and were brought over from East Asia in the 90s.

What Problems Do Stink Bugs Cause?

One of the biggest questions people have about stink bugs is if they are dangerous or not. Overall, stink bugs are just nuisance pests because they don’t post any health risks to humans. They aren’t known to spread any diseases, and they don’t bite.

The biggest concern with stink bugs is their numbers. As the infestation grows, they can be hard to get rid of and will leave the house with a strange odor. They can also become an issue when large numbers of them will damage things like ornamental plants, gardens, and certain plants like fruit trees. Other than the agricultural issue, they aren’t known to cause any significant property damage.

Even though stink bugs are mostly a nuisance pest, they still aren’t great to have around your home, and as the infestation grows, getting their numbers under control can become difficult. The best way to protect your home from stink bugs is to take steps to prevent them in the first place. While prevention steps can’t completely deter them, they can help.

Stink bugs are not pleasant to look at, and the smell that they emit can be rather disgusting. The most effective way to keep stink bugs out of your home and keep them from coming back is to get ongoing professional pest control help from Action Pest Control. Our technicians are certified and trained to address stink bugs and other pest problems. To get started, contact us today. We even offer free estimates.