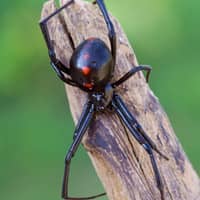 Spiders, regardless of the species, have the ability to strike fear in the hearts of the viewer. Many people have an almost uncontrollable fear of spiders and want them immediately killed. Ironically, most spiders are more beneficial than harmful, killing other unwanted pests. The female of one particular species will often kill her male counterpart once mating has occurred, thus the well deserved name “black widow.”

However, spiders should be respected knowing that some of them are poisonous and can inflict harm. The black widow spider should certainly be given a wide berth and be respected. These notorious spiders are easily identified by the red colored hourglass mark on their abdomen. It is estimated that the venom from the black widow spider is 15 times more powerful than the venom of a rattlesnake; however, they release such a relatively small amount of venom when they actually bite. The rattlesnake, on the other hand, releases all of its venom with a strike.

Again, while the strength of the venom from a black widow is very potent, the amount of venom injected with one bite is minute. Fatalities are quite rare and even then, usually to the elderly or young children. The majority of people that have been bitten by black widows will experience very little serious damage.

Some of the symptoms and effects a human can experience from a black widow bite include nausea, muscle pain, and difficulty breathing due to paralysis of the diaphragm. The good news is that the black widow doesn’t go around looking for someone to bite. They are considered non-aggressive and will only bite in self-defense or when threatened.

Be mindful of the fact that black widows will hide in dark, damp areas. A stack of wood left outdoors is a good place to use caution. The moisture collected, along with the darkness deep into the pile, will attract these venomous black widows. Other places in which one may expect to see a black widow may include basements and garages. Again, any area that is prone to moisture and numerous things to hide under will be attractive to these shy spiders.

You should also remove any trash or junk piles from their property including discarded tires, empty containers, and woodpiles in an effort to reduce the attraction of black widows. Use gloves and long sleeved clothing when moving woodpiles and other suspicious areas. Respect the black widow spider and seek medical attention if bitten.

And of course, if you've identified a black widow spider problem in your home, contact Action Pest Control for relief. Our pest control specialists are ready to help you combat spiders in Louisville with effective treatment options!