A Guide To Boxelder Bugs For Louisville Property Owners

Kentucky sports its fair share of beautiful scenery, and Louisville homeowners know just how scenic our properties can be when we take care of them. One thing that gives our state that especially stunning feel is that all of our different trees add to the aesthetics. But a pleasing sight isn’t all these trees bring to our properties. Many trees, like the boxelder, also lure a variety of pests into our yards. 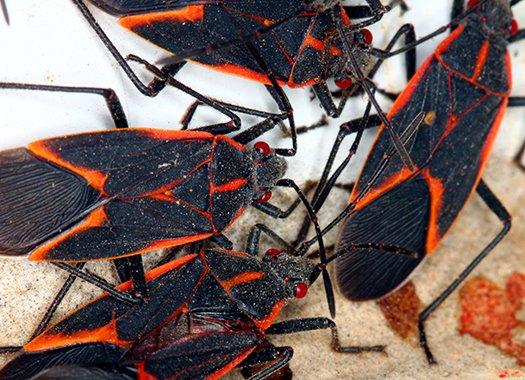 Wherever there are boxelder trees, boxelder bugs are sure to follow. These small (10-15 mm) pests are usually black with thin red and orange markings. Their flat bodies give them easy access to your house, which they will frequently try to invade in preparation for winter. You’ll find them anywhere from your shed, garage, and basement to your kitchen and attic. Many homeowners never know they’re there until they see evidence of the infestation once the pests have left for spring.

If you have boxelder trees on your property, you’ll need to be on the lookout for large gatherings of boxelder bugs. During warm months, they’ll begin to gather around the trees, on rocks in the yard, and anywhere with a lot of sunshine. Once they feel the cooler air of winter coming on, they’ll begin migrating towards houses, sheds, and garages to find insulation against the cold that will kill them in most cases.

The problem with having boxelder bugs on your property is that they will invade in large numbers. Boxelder bugs can puncture your skin with their sharp mouths, leaving red bumps that look like mosquito bites, and they will also stain your furniture and curtains red with their excrement. Plus, much like a stink bug, they’ll elicit a very unpleasant odor if disturbed or squished.

If you just had one or two of these pests in your home, none of these issues would matter. But the fact that they invade in tremendous numbers can lead to big problems, especially when it comes to the odors and stains they’ll leave behind.

In order to avoid having your furniture stained and incurring stains on curtains and furniture, you’ll need to be proactive in your pest control practices as winter approaches. (One side note to address first: Don’t try to kill them once they’re within your walls where you can’t dispose of the carcasses. Any dead insect bodies that lay around will attract a multitude of other pests.)

Keeping boxelder bugs out is very tricky since they’re so small. However, if you adhere to the following tips, you might avoid an infestation:

It can be pretty intimidating to try and check off all of these items, and it can be overwhelming to think about every crack and crevice in your house. Plus, you can do everything right and still incur an infestation. When it comes to getting guaranteed results, you’re much better off going with the professionals. Contact Action Pest Control for more advice or assistance.