What Happens After Termites Swarm 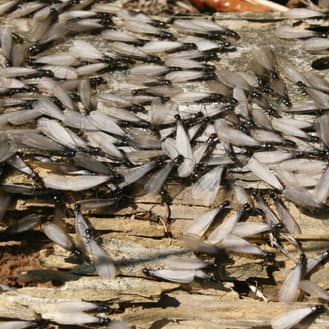 If asked what is the most destructive wood pest in the United States, the subterranean termite immediately comes to mind. This type of termite causes billions of dollars in property damage each year. To put this in perspective, this is a greater amount of damage than that which is caused by wind and fire combined. Obviously, early detection of infestation of this destructive pest is critical.

During the spring and early summer residents and business owners may see a large swarm of winged termites on their property and perhaps even inside their buildings. These swarmers or alates begin their quest for a mate in which to pair up and reproduce. Thus, new colonies of destructive subterranean termites are created.

The presence of swarmers is often the first indication to the homeowner that there is an infestation of subterranean termites close by. This termite colony may be inside the home but is often outside and yet in close proximity of the property. This huge swarm of winged termites sometimes flies in through open windows or doors as they begin their flight.

The purpose of these swarmers is to fly to another location, team up with a mate, shed their wings and start a new colony. The development of the new colony is slow at first. However, the new queen quickly gets to work with her egg-laying abilities. She increases her production each year, producing as many as 10,000 offspring in one year. Once the colony becomes mature, the population of subterranean termites can reach as many as 5 million. However, the average size colony is more like 300,000 termites. Once the colony has existed several years and is large in number, additional swarmers are produced and the process begins all over again.

Among other signs, shed wings are a good indication that there is an infestation of subterranean termites in or around the home. While physical damage may not be visible, professional pest control specialists should be called in for a thorough termite inspection, as the potential damage from termites is too great a risk for DIY methods.

If you've seen a termite swarm in or around your home, contact Action Pest Control for effective termite control.