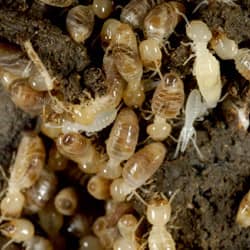 Indianapolis termites look a lot like termites in other states. In fact, they look JUST like termites in other states! No matter what species or classification, all termites are insects. This means that no matter what kind of termite you encounter, you should immediately notice some distinct insect characteristics. All insects have two antennae, six legs, and three body segments: a head, a thorax, and an abdomen. Termite antennae have what look like several tiny balls stacked one on top of the other, coming out each side of the head in either a slight curve or straight line.

A termites six legs will visually vary, but two always extend from the thorax and four from the abdomen. This will help you to know which part of the insect is the thorax. If you are examining what you think is a termite, and you see three distinct body segments, you are not looking at a termite, but probably a flying ant, which has a noticeably pinched waist. Termites have three body parts, but the thorax and abdomen appear as one part which gives it the appearance of only two parts.

Termite Queen: The queen of a termite colony typically remains hidden her entire life, so you are unlikely to ever see one in person; but if you did see one, you would notice right away that she is much bigger than other termites. In fact, the longer she lives to produce babies, the larger her abdomen will become. She will have a normal sized head and thorax, but her body looks like a large bloated slug.

Termite Workers: These termites are generally pale, slimy, and featureless. They have translucent skin and a teardrop shape since their head is slightly smaller than their abdomen. You may see these termites if you are ripping out a wall or if you pull up some mulch and find a sheet of them underneath.

Termite Soldiers: A termite soldier, which protects the nest, has a head that is dark yellow with dark brown pincers which make it look something like an earwig. These termites may be seen if you discover the nest of a termite colony since their job is to guard the nest.

Termite Swarmers: This is the termite you are most likely to see. Swarmers are winged termites that leave a mature nest to start a new nest nearby. They have four large white wings that stack on their back, and their bodies are black. They can usually be seen on exterior walls or window sills.

Now that you know what termites look like, it is important to know what to do if you see them in or near your home. Termites cost home and business owners in the United States over $5 billion dollars each and every year because they often do their dirty work completely undetected which is why it is important to be on guard for these pests in order to catch them before it is too late to repair the damages.

If you see termites, or you want to know for sure whether or not you have them eating away at your home, the professionals here at Action Pest Control can help. When it comes to termites, take action and get Action.

Action Pest Control received an average rating of 4.7 out of 5 stars from 110 reviews. 4.7