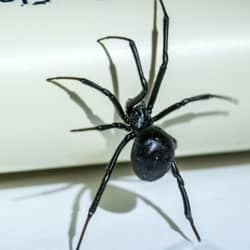 Where Do Black Widows Live?

Black widow spiders can be found throughout the United States with higher concentrations in the South and West; they are also found in Australia, Africa, South America, southern Europe and Asia. They tend to frequent dry, dark areas where they can take shelter. Favorite areas include hollow tree stumps, brush piles and dense vegetation, trash piles or cans, barns, basements, and garages.

The black widow spider venom is up to 15 times stronger than the venom of a rattlesnake according to North Carolina State University. They don't seek out humans to bite them, but rather will bite only when disturbed. Only female black widow spider bites are a potential threat to human health, however. Most black widow bite victims do not suffer long term or serious damages, and the bites are very rarely fatal. Young children, senior citizens, or people who are already ill are at the highest risk when bitten by a black widow spider.

As for the pain of a black widow bite, most people report it feeling like a pinprick. The pain spreads throughout the body at times. It can cause sweating, nausea, stomach and back pain, and hypertension. In rare cases, it can cause difficult breathing due to paralysis of the diaphragm. Pain from a black widow spider bite can last as long as 8 to 12 hours while other symptoms can last for a few days. If you are bitten by a black widow, it is recommended that you seek out anti-venom from a medical professional.

How to Prevent Black Widow Spiders

Go through your storage areas such as the basement, attic, and garage and remove as much clutter as possible to eliminate the likely hiding spaces for black widow spiders. Vacuum room corners, under furniture, and around all windows.

Outside, trim the weeds around the foundation of your home and remove debris like tree stumps to discourage black widows and other insects from living near your home. Seal your doors and windows with door sweeps and screens to prevent pests from getting inside.

If you suspect you have black widows in or around your home, call Action Pest Control for prevention and removal solutions. We can treat every area of your home to eliminate existing threats and to prevent black widow spiders and other pests from getting inside.